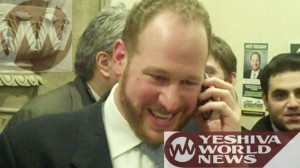 Never before has a local election taken the Orthodox community with such emotions and opinions. Boro park was flooded with various pieces of literature, posters, bumper stickers, and vehicles blaring their campaign messages all through the streets of Flatbush and Boro park.

Greenfield just told YWN “I thank the community for our victory. This is not my victory this is the peoples victory. It’s time to bring this community together. I look forward to working with everyone in the community.”

YWN congratulates our dear friend Councilman David Greenfield, and are sure that he will represent all members of the community to the best of his ability.

Click on the following link for a video of David talking to YWN seconds after winning the race: http://www.theyeshivaworld.com/video_viewer.php?clip=ZK8mrB_2Cgk&player=y

VIDEO OF VICTORY SPEECH ALONG WITH PHOTOS WILL BE POSTED SHORTLY