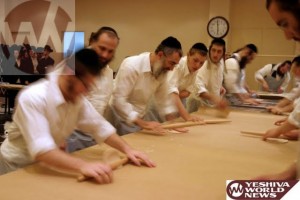 [VIDEO & PHOTO LINKS BELOW] ‘Sof Zman’ especially following Purim, is a time when the learning in a Yeshiva sometimes takes a little ‘dip’, with the hasmodo (diligence) not as good as it should and could be. Prevention being the best cure, the Hanholas Hayeshiva of Yeshiva Ketana Adass Yisroel Melbourne came up with the idea to boost these last few weeks with a special matza baking ‘mivtza’ (program), where those who succeed in learning b’hasmodah would bake their own Matzos Mitzvah for Pesach. The talmidim received cards where they would mark their ‘retzifus’ (learning diligently without a break) hours, attendance etc and hand them in. Those reaching a minimum predetermined amount, were allowed to join, and those excelling were awarded preselected jobs and first choice of matzos.

Wheat flour (rechayim shel yad) was sent by international courier from Israel and fortunately customs didn’t open any of the bags, as this would have rendered the shmurah flour useless.  On Monday late afternoon, the hanholah and bochurim filled jars of “Mayim Shelonu” from a bore water pump to be used for the Matzos, and the flour arrived the following day (this past Tuesday 8th Nissan), just hours before the baking.

The excitement was palpable among all the bochurim as they prepared for this unique Mitzvah they had earned through their hasmodo. There were several shiurim delivered to the bochurim on the halochos and practical techniques relevant to Matzah baking.

It was the first time, in recent memory, that a chabura had baked Matzos Mitzvah in Australia, besides for on Erev Pesach.  Bez”H, the outcome was ‘sensational’, with a remarkable sof zman and an amazing matzo baking event enjoyed by all.