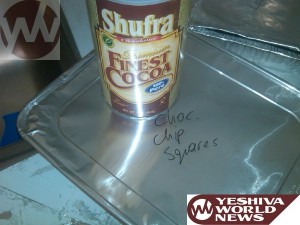 [IMPORTANT UPDATE BELOW] (Originally posted Sun night) WN has been flooded with emails in the past few hours regarding some type of “problem” with Shufra Baking Cocoa which is sold in stores as Kosher for Pesach.

YWN attempted to ascertain what the problem is, but were unsuccessful. What YWN can report is a public interview currently on Kol Mevaser.

In the interview, Rabbi Bonyomin Gruber stated multiple times that “he does not know what the problem is”, but stressed that his certification which was used in previous years was not supposed to appear on the baking cocoa for sale this year. Rabbi Gruber said that this year the coca was manufactured in China, and his organization was not involved in the production.

According to Rabbi Gruber, the OK Kashrus certification, which also appears on the label says the cocoa may be used, and is 100% Kosher for Pesach.

Although Rabbi Gruber does not  know what the problem is, he said that no utensils already used should be thrown out or require Kashering – “even for the biggest Machmirim”.

No offical statment has been been released by the OK.

YWN advises our readership to avoid any “Baal Tashchis” (discarding of baked goods) before the facts of the “unknown problem” become clarified.

Any further information available will be posted by YWN immediately.

UPDATE 11:30AM EST: YWN has just spoken with Rabbi Levy of the OK, who tells us that in the past 30 years, he and his Mashgichim have been to countless cocoa factories across the globe – including Europe, the Far East, Africa, etc etc, and have never ever found any Shalia (question) on any 100% pure cocoa powder. Additionally, Rabbi Levy consulted with leading experts in the field, as well as multiple Kashruth organizations, and all agree that there is no issue.

Rabbi Levy also told YWN that he just spoke with Rabbi Gruber, who is in agreement with the OK that there is no Shaila.