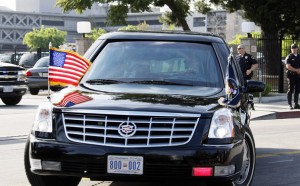 President Obama “quietly breached years of protocol” Saturday by leaving the White House with no press pool, according to the Associated Press.

Before members of the press were scheduled to assemble for the day’s pool, Obama left the White House to, according to aides, attend one of his daughter’s soccer games.

Reporters and photographers didn’t have a chance to see him or his vehicle to verify his presence at any location.

Here is the pool report from Saturday morning’s events:

The president left the White House at approximately 9:20 to attend one of his daughter’s soccer games at 40th and Chesapeake NW. A pool was hastily called at around 9:35 and drove north at 9:43 to catch the president before the game ended. We didn’t make it. The President returned to the White House at 10:17. The pool returned at 10:30.