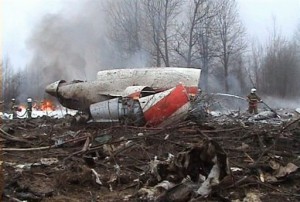 There were no survivors in the early Saturday plane crash that claimed the lives of 97 people, including Polish President Lech Kaczynski. Members of his cabinet, senior state officials and the commander of the Polish armed forces were also among the dead, as was the president’s wife. 88 of the dead were members of the official Polish state delegation on board, flying to Russia for the 70th anniversary of the massacre of Polish prisoners of war in the village of Katyn. Some 20,000 Polish officers were executed there during World War II.

The flight took off from Warsaw and it was on an approach pattern to Smolensk Airport when the crash occurred. The black box has been recovered, which investigators hope will provide a clue as to the chain of events. According to preliminary information, the plane, a Tupolev-154, is believed to have struck trees near the beginning of the runway, with the pilot attempting to land in very difficult fog conditions.

The partial list of those killed published on the Web site of President Lech Kaczynski’s Law and Justice Party includes:

Gen. Franciszek Gagor — head of the army chief of staff

Slawomir Skrzypek — head of the National Bank of Poland