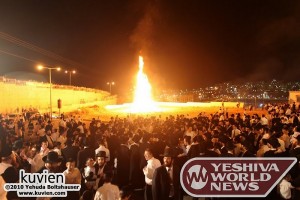 Below are dozens of link (more than a thousand photos) of Lag BaOmer events around the world.

YWN thanks our photographers, and all those who submitted photos. You help us keep our photo albums updated daily, which is by far the largest of its kind on the Internet!

(Please note that YWN did not exclude any locations – but posted every location which sent to us.)

From dawn to dusk, the air in Meron was filled with simcha Lag BaOmer day as yidden from all walks of life came to participate in the hilula of Rabbi Shimon Bar Yochai. This stunning essay documents the day, starting with shacharis b’vasikin followed by an daf yomi shiur. Hundreds of fathers brought their sons for their chalakas while other children played with crossbows and dance. Some people went on hikes to nearby mekomos kedoshim as others joined the crowds by the fires.

Following an uplifting shabbos in Meron, thousands of people gathered by Rashbi’s tzyion on motzei shabbos for havdalah. Taking advantage of the relative calm before the storm, people flocked to daven by the tziyon before the first buses from Yerushalayim arrived, as security and rescue personnel put the finishing touches on what many say is one of the most complex inter-agency events of the year. At 11:00 people gathered to watch the Boyaner Rebbe light the medura. Dignitaries including Eli Yishai were present for the ceremony, which was followed by the start of the dancing, accompanied by the famous band of musicians.

Not everyone was able to make it to Meron on Lag Ba’Omer. Therefore, some people in Yerushalayim went to Kever Shimon HaTzaddik to celebrate and daven.

Over a thousand people gathered in the vicinity of Merkaz Kesem in Modi’in Illit on motzei shabbos for the lighting of the central Kiryat Sefer medura. Organized by the Darchei Chinuch organization, the bonfire was built by talmidim of a few different local schools. While traditionally lit by the Rav of the town, HaRav Kessler, this year a young bachur who recently had a recent refua lit the torch following the recital of a kapitel tehilim. Also present at the event was the Admor M’Belsky. The festivities ended a few hours before the rains began to fall, making the work of the under-staffed fire brigade easier.

As children put their final touches on Lag BaOmer “medurot” in Modi’in Illit and Moshav Matityahu, thousands of people make their way from Yerushalayim to Meron in preparation of the “hilula”.

YWN Israel will be providing coverage of multiple Lag BaOmer locations including Meron. Make sure to check back throughout the day for updates with video and photo coverage.