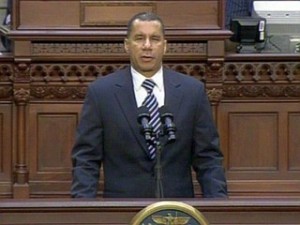 In the wake of the controversial Arizona immigration law, Governor David Paterson announced the creation of a panel Monday that will seek to give some immigrants a second chance.

The panel will help the governor review pardon applications. It’s a move that’s expected to help legal immigrants who are facing deportation for a prior conviction.

Cases that would be considered include those where the conviction was a minor offense, is old, or the person in question displayed extensive efforts to become functioning members of society.

“I think everyone agrees that it’s in need of reform. But it is a method that we are applying today that we think in some way will set an example,” said the governor.

“A lot of people want to come to this country. A lot of people that are here illegally. If they’ve already broken the law, there’s no reason that I believe that they should be allowed to stay here. Of course, it depends on of the type of crime,” said State Senator Martin Golden.

Paterson says only a small number of immigrants will be affected by the panel.