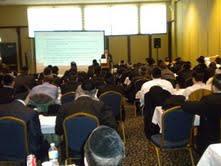 Close to one hundred attendees, representing more than 50 different institutions, filled the Congregation Adas Yeshurun in Chicago on Tuesday, May 11 for a workshop dedicated to legal issues pertaining to Orthodox schools, synagogues and charitable organizations.

After a buffet lunch, introductory remarks were delivered by Rabbi Dovid Schnell, president of Agudath Israel of Illinois. He remarked that while such workshops have been presented in several other cities across the country, “such a seminar in Chicago was long overdue.”  Rabbi Schnell thanked members of the planning committee, including Agudath Israel of Illinois’ comptroller, Rabbi Yitzchok Ehrman, Rabbi Yosef Knopf, and development coordinator and director of special events Mrs. Sarah Nisenbaum for their help in organizing the seminar.

Rabbi Zev Cohen, rav of Congregation Adas Yeshurun, was then introduced to provide words of chizuk.

“The question,” said Rabbi Cohen, “is what citizens of this country, Jews and non-Jews alike, are going to think of our behavior.

Mr. Kupfer addressed the rules regarding charitable contributions, relevant topics in criminal law, regulatory/licensing requirements for certain financial activities, required corporate formalities and bookkeeping for non-profits. Participants voiced appreciation for what one called his “informative presentation” and “clear explanations of complex legal topics.”  Mr. Ginsparg followed with a practical discussion of not-for-profit/tax-exempt issues and various state filing requirements. The session continued with Mr. Kupfer delivering a detailed explanation of parsonage and Qualified Tuition Reduction Programs, two often misunderstood areas of tax law applicable to most schools and shuls. The workshop ended with a question and answer period, yet participants remained behind for nearly an entire hour after the program officially ended in order to continue asking questions.

The recurring feedback was that the seminar deserved even more than its four hours. But attendees commented that “the speakers and materials were great,” the information was “very well explained” and the subject matter “all very relevant.”

Those in attendance went home with a useful handout booklet, as well as a resource CD-ROM loaded with more than 100 MB of helpful legal, tax, and accounting topics relevant to non-profit organizations.  Accountants in attendance also earned CPE credit, graciously arranged by the accounting firm of Frost, Ruttenberg & Rothblatt, P.C.

This workshop continued the expansion of Agudath Israel of America’s broad efforts to educate the Orthodox community about the intricacies of federal and state law as they pertain to non-profits and for-profit corporations.  Most recently, a similar workshop was held in Cleveland on April 25th.

Just days earlier, Rabbi Chaim Dovid Zwiebel, Agudath Israel’s executive vice-president, underscored the need for such workshops during his address at Agudath Israel’s 88th annual dinner in New York on May 9th. “[W]e need to do all in our power to eradicate, once and for all, the shady dealings, the unethical conduct, the casual attitude toward the law of the land, that is all too often exhibited by members of our very own community. It is for this reason that Agudath Israel is taking numerous concrete steps to bring about improvement in this area.”

“Since this past summer,” stated the Agudah leader to the crowd of more than a thousand at the New York Hilton, “we have sponsored approximately ten seminars devoted to the concept of dina d’malchusa dina, with specific programs developed for yeshivas, shuls, gemachs, businesses and individuals, in the greater New York area, on the West Coast, in the Midwest – all over.”

There is clearly a need and a desire for this initiative to continue, observes Rabbi Yehiel Kalish, Agudath Israel’s national director of government affairs.  And “given the success and the positive feedback we’ve been receiving from these events,” he says, “we look forward to expanding this effort to other interested cities across the country.”   He extended an invitation to “communities interested in such a seminar” to “let us know where the needs are.”

Members of the public interested in purchasing a recording of Tuesday’s workshop can e-mail [email protected] or call 847-674-4000 ext. 307.