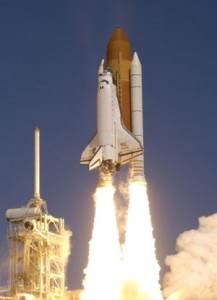 The space shuttle Atlantis, carrying a crew of six, a Russian docking module and critical spare parts, vaulted into orbit Friday on a 12-day space station assembly mission, the orbiter’s 32nd and final planned flight after a quarter century of service.

With NASA bracing for the looming retirement of the shuttle fleet after a final three missions, Atlantis roared to life and rocketed away from its seaside pad at 2:20 p.m. Eastern time. The eight-and-a-half-minute ascent appeared normal as the spacecraft climbed through a partly cloudy sky, putting on a familiar, soon-to-be-missed show for area residents and tourists who turned out in droves to catch a glimpse of Atlantis’s final launching.

A camera mounted on the shuttle’s external tank provided dramatic views of the climb to space with no obvious signs of foam insulation or other debris that might have caused any damage.

Strapped in on Atlantis’s flight deck were Capt. Kenneth T. Ham of the Navy, the commander; Cmdr. Dominic A. Antonelli, also of the Navy, the pilot; the flight engineer, Michael T. Good, a retired Air Force colonel; and Garrett E. Reisman, veteran of a three-month stay aboard the space station in 2008.

Seated on the shuttle’s lower deck were Capt. Stephen G. Bowen of the Navy, a former submariner, and Piers J. Sellers, a British-born astronaut who arranged to carry a piece of bark from Isaac Newton’s apple tree into the weightlessness of space. All six astronauts are shuttle veterans.

If all goes well, Captain Ham will guide Atlantis to a docking with the forward port of the International Space Station early Sunday, kicking off a busy week of assembly work.

The day after docking, Captain Bowen and Mr. Reisman plan to stage a six-and-a-half-hour spacewalk to install a spare Ku-band dish antenna and to mount an equipment stowage platform on a Canadian robot arm extension. The next day, Mr. Reisman, operating the station arm from inside the station’s new multiwindow cupola, will attach the 17,760-pound Rassvetmodule to the Earth-facing port of the central Russian Zarya module.

The new compartment will serve as an extended docking compartment, providing needed clearance between the Russian segment’s forward port and an American storage module scheduled for installation on the next shuttle mission later this year. The new module was loaded with 1.5 tons of American supplies and equipment for launch aboard Atlantis.

The day after the Rassvet installation, Captain Bowen and Mr. Good will stage a spacewalk to begin replacing six 375-pound batteries in the station’s far left set of solar arrays. A final spacewalk with Mr. Reisman and Mr. Good is planned to finish up the work.

Atlantis is scheduled to undock from the space station May 23 and land back at the Kennedy Space Center around 8:44 a.m. on May 26.

While this is Atlantis’s final planned mission, the shuttle will be processed for use as an emergency rescue vehicle to support NASA’s final planned shuttle flight late this year or early next.

NASA managers are looking into the possibility of actually launching Atlantis and a four-person crew on a space station resupply mission to take advantage of the external tank and boosters that otherwise would go to waste. The astronauts could use the space station as a safe haven in the event of major problems and rotate back to Earth aboard Russian Soyuz spacecraft, eliminating the need for a shuttle rescue mission. A decision is expected early this summer.