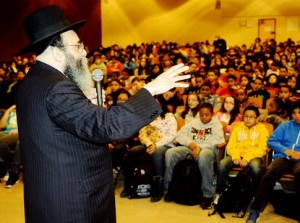 Hasidic and Hispanic residents have lived side by side in the neighborhood for years – but rarely talk to each other or understand much about each others’ worlds.

For the students at Intermediate School 318, what they heard about how their neighbors lived surprised them.

“In our community many families don’t have television or radio,” said United Jewish Organizations of Williamsburg Rabbi David Niederman as the students gasped in disbelief. “We don’t go to movies but our children are happy just like you even though we are dressed very differently.”

Niederman also said the two groups had more in common than either might believe: “We all want to feed our children. We all breathe the same air.”

A panel of rabbis and activists led by Borough President Marty Markowitz kicked off the program yesterday with the first of several visits to Williamsburg schools.

Five speakers, including Niederman, explained elements of Hasidic culture to about 550 students at the Walton St. school – citing traditions such as wearing hats and growing their sidelocks long.

One child asked why Hasidic men wear a hat. “We cover our head in the presence of God,” said Niederman.

What they heard seemed to make an impression on the students.

“I never talked with a Hasid before, but now I see they’re just like us,” said Matyna Grochecki, 13.

Markowitz organized the program in response to two beatings of Hasidic men that occurred in Williamsburg in November.

“Many of our students see Orthodox Jews on the street every day but don’t have a clue of what the culture really is,” said Markowitz.

Two 15-year-old boys are charged with assault as a hate crime for an attack that occurred in the neighborhood on Thanksgiving. Yesterday a detective testified that one of the teens confessed to beating up strangers, three of them Jewish, “for fun” over the past couple of months. Hasidic residents are worried the violence will continue.

“The Jews here are afraid to walk the streets at night,” said Moishe Roth, 35. “It’s worse than it’s been in years.”