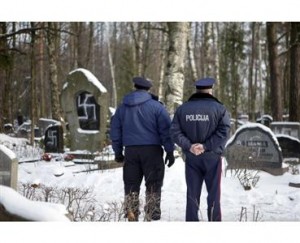 Riga, Latvia – Latvian police said Thursday they had detained three extreme-right teenagers suspected of involvement in the vandalism of a Jewish cemetery in the Baltic state’s capital Riga a month ago.

“Together, they formed a skinhead group which may have planned additional racial crimes,” Ints Kuzis, the head of the Riga regional state police department, told reporters.

Only the 15-year-old is suspected of carrying out the December 8 attack in which 89 tombstones were desecrated with white-painted swastikas.

The swastika, the symbol of Nazi-era Germany, is a favoured motif for today’s far right.

The other two suspects are believed to have been aware of the crime, police said.

Kuzis said the trio spoke Russian among themselves, but did not elaborate.

Around 40 percent of Latvia’s 2.2 million people claim Russian as their native language.

“Judging from the information we’ve obtained, their plans were huge,” police spokeswoman Sigita Pildava told AFP after the press conference, but again declined to give details.

Police said the trio had come to their attention last summer not only due to their racism, but also because of an overall hatred of religion.

Investigators said they do not suspect them of involvement in an incident five days after the cemetery attack in which a monument to a Latvian labourer who saved dozens of Jews during World War II was also splattered with white paint.

The Jewish cemetery was also vandalized in September 2003, and five teenage perpetrators were sentenced to between six months and three years in prison.

Around 85,000 Jews lived in Latvia before World War II, but 70,000 were murdered in the country by Nazi Germany and local collaborators or perished after being deported to camps elsewhere in Nazi-occupied Europe.

Between 200 and 450 Jews survived the war in Latvia itself.