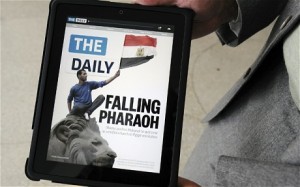 News Corp. launched its most ambitious effort yet to re-invent the way news is delivered and consumed with the introduction Wednesday of The Daily— the first national news publication designed specifically for Apple’s iPad.

Subscribers will pay 99 cents a week, or $39.99 a year, for The Daily, which will publish 365 days a year. IPad users who download the software application to access The Daily can charge the subscription to their iTunes accounts, making this the first application at Apple’s App Store that directly handles subscriptions.

Apple will soon announce other publications that will be able to offer subscriptions directly through the iPad, says Eddy Cue, the company’s vice president of Internet services. He declined to discuss additional details about Apple’s change in policy.

The Daily is visually dazzling with features including 360-degree photographs, a table of contents that presents a carousel of images for different stories, interactive graphics and video. Users can tailor their content. For example, they could pick specific sports teams to follow. They also can listen to stories read aloud by professional announcers.

Editorially, though, the publication provides a familiar magazinelike mix of news, arts coverage and reviews, gossip, opinion, sports and games.

An unsigned editorial in the first issue says that the publication “will push for policies that give Americans the maximum possible freedom in their personal lives.” It adds that the editors “don’t believe that expanding government is the solution to most problems.”

The Daily has bureaus in New York and Los Angeles and a network of freelance contributors.

Editor-in-Chief Jesse Angelo declined to say how much of a commitment the publication will make to investigative journalism. “Read the product every day, and you’ll find out,” he said at a press conference in New York.

Some content will be available online and can be shared via Facebook, Twitter and e-mail. But executives said that users will only be able to take full advantage of the interactive features via the iPad.

News Corp. says that it expects to pay about $30 million this year to produce The Daily. It initially will generate most of its revenue from consumer subscription payments. But executives hope ad sales will grow enough to provide a 50-50 balance.