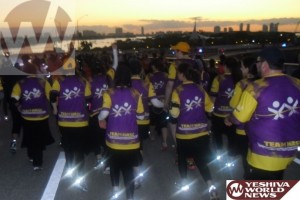 This past Sunday, history was made!

Team HASC’s 74 runners completed the ING Miami half marathon for the very first time! “Running” side by side with their counselors and friends, 5 HASC campers made it through the race- some running, some being pushed in their wheelchairs, and one tired camper, after running 6 whole miles on his own was escorted to the finish line in a police car!

Zack Pollack, diagnosed with cerebral palsy at birth, was one of the marathon participants. Zack was pushed by his running mate & HASC counselor, Michael Celler, for 13.1 miles. Upon reaching the end of the race, there was not a dry eye in the crowd as Zack was helped out of his wheelchair so that he and his good friend Michael could cross the finish line together. These few steps were huge strides for Zack who never dreamed that he would ever cross a marathon finish line, literally on his own two feet.

Zack was handed his award by a very touched ING official who said, “you sure deserve this, young man.”

After completing the run, Zack and Michael reached the Team HASC tent and were greeted by an uproar of cheer from the entire team whereupon they lifted Zack up in his wheelchair and broke out in the Camp HASC song.

At the Team HASC post-race party, Zack received a trophy for achieving something that motivational speaker Richard Bernstein, the renowned blind Iron Man, called understanding “sheh’hakol ba’rosh.” Richard’s inspirational message to Team HASC on the Shabbos before the marathon was that if you only put your mind to it, you can accomplish incredible things.

Even the American Airlines crew that flew Zack home gave him a cheering welcome, in recognition of the fact that hard work, perseverance, and a dedication to make a difference ensures that anything is possible.