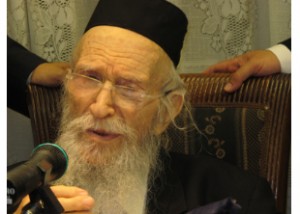 Before the end of the shloshim following the petira of HaGaon HaRav Michel Yehuda Lefkowitz ZATZAL, it has been learned that the famed esrog tree in the yard of his Bnei Brak home began drying out, the Merkaz Ha’inyanim newspaper reported.

It is known that the late rav planted seeds for the tree, seeds that he received from the Chazon Ish, to make sure that he would have an esrog that was free of any doubts of crossbreeding.

It is reported that the Chazon Ish gave the seeds to the rav towards ensuring this particular line of esrogim would continue. Rav Lefkowitz told the Chazon Ish that he simply does not know anything about planting or maintaining an esrog orchard, fearing the effort would demand too much of his time from limud Torah, but the Chazon Ish remained persistent, adding “HaKadosh Baruch Hu can send a bracha with a simple wind”, and so it was, and the tree was planted and blossomed, until the petira of the rav.

The tree provided esrogim for kiyum hamitzvah for some six decades, esrogim that were used by Gedolei Yisrael Shlita, talmidim of the Chazon Ish and members of Rav Lefkowitz’s family. The Rebbe from Toldos Aaron also received such an esrog annually. Some of these esrogim was used to plant additional trees, today known as esrogim “Zan (Variety) Chazon Ish”.

When the Toldos Aaron Rebbe heard of the situation, he sent esrog experts to Bnei Brak to inspect the tree towards validating the situation and seeing if they could assist. The experts reported the tree appears to be drying out, without any reason, and they simply remain clueless as what can be done.