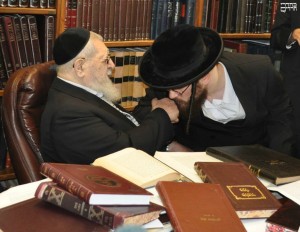 The Goldstein family held a private seuda to mark Yoel Zev’s release from Japanese prison, opting to cancel a gala event that was planned in Bnei Brak. During the event, more or less a forum of family and close friends, Yoel revealed that in the Japanese prison he was compelled to eat treif. Japanese officials told him that if he does not eat the food served to him, he will be force fed. Yoel lamented that it was painful but he was left without an alternative. He described the harsh conditions of his incarceration, detailing the staggering heat during the summer months and the bone-chilling cold during the winter.

He spoke of his friend as well, Yaakov Yosef [ben Reizel] Gruenwald, who remains in a Japanese prison, telling the tzibur present his Yaakov’s present state is not good and he is having a most difficult time. The prison in which Yaakov is being held is known for its poor conditions and the prison guards are exceptionally harsh. He is only permitted four visits a month. Yoel called on everyone to daven on his behalf!

During the event Yosef Banda, who was released from a Japanese prison earlier arrived, adding to the high emotions that prevailed during the seuda.