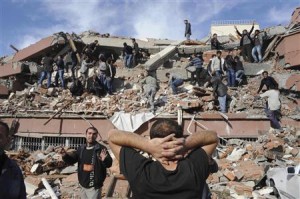 13:12 IL: Israel Radio reports a strong earthquake hit Eastern Turkey a short time ago. The quake, measuring 7.6 on Richter scale was felt in areas of Tel Aviv Israeli seismological officials report. The exact epicenter of the quake is under investigation, but first reports indicate central or eastern Turkey.

Turkish media is reporting the quake only measures 6.6.

French media officials report that a number of buildings have collapsed in the city of Van. Van is located in Eastern Turkey, on the eastern shore of Lake Van.

13:17 IL: The 7.3-magnitude earthquake at 1.41 p.m. local time (1041 GMT) was centered about 19 kilometers (12 miles) northeast of Van, the capital of the province which carries the same name. It struck about 7.2 kilometers (4.5 miles) deep, making it a shallow earthquake, according to the United States Geological Survey (USGS).
According to Turkish media reports, a number of buildings had collapsed in Van, but other details were not immediately available.

13:50 IL: MSNBC: “Two buildings collapsed in Van, but the telephone system is jammed due to panic and we can’t assess the entire damage immediately,” Bekir Kaya, the mayor of Van, told NTV television.

“There are so many dead. Several buildings have collapsed, there is too much destruction,” said Zulfikar Arapoglu, the mayor for the town of Ercis told NTV television.

14:25 IL: Reports from Turkey speak of “many dead” as well as injured and trapped persons under collapsed buildings.

15:00 IL: IDF Chief of Staff Lt.-Gen. Benny Gantz has ordered IDF Homefront Command search & rescue officials to begin preparations to head to Turkey, aware that country will require the expertise of Israel’s team, which has traveled the world assisting after natural disasters such as the earthquake that hit that country earlier today.

Ganz has signaled that such a move will require government approval, and it appears he sees this will be the case despite Turkey’s unilateral halt in diplomatic and military ties with Israel.