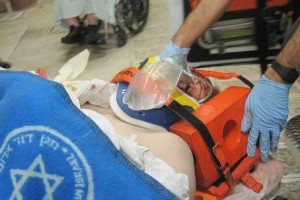 According to Israel’s Reshet Bet Radio, the victim in the Wednesday morning chareidi lynching attack in Geula told people around him that rumors have it that the Gur Chassidim were coming to take revenge against him and others.

Speaking on Reshet Bet, Meah Shearim resident Yosef Kroizer lamented the events; adding the beatings do nothing to enhance the honor of the Gur or any other rebbe for that matter. He added that he is certain the Rebbe is unaware of the events as if they were in his defense, and sadly, those who perpetrate such actions do not seek approval from rabbonim before they act.

Kroizer concluded that when a neighbor with internet showed him the photos of the beaten chossid, it reminded him of the recent media photos of the slain Libyan leader. He stated there was no justification to come to shul on Shabbos morning looking for a fight, and certainly no justification to beat a man in the street, questioning where this gang violence is leading.

Jerusalem Police spokesman Shmulik Ben-Ruby stated the entire matter surrounds the real estate dispute in Batei Warsaw, involving Gur and the victim. He adds that as we speak, there are undercover agents inside Meah Shearim who are the eyes and ears of police, working to apprehend those responsible.

To date, nine people were arrested, all sikrikim, no one from Gur, but he expects additional arrests are imminent, but adding they do not know the identities of the Gerrer Chassidim responsible for the latest incident.

Ben-Ruby told Israel Radio that chareidi rabbis and leaders oppose this violence and it should be clear to all that this is simply unacceptable.

Attorney Yair Nehorai, who represents the victim, Avraham Chaim Hirschman and other sikrikim is critical of police, stating he sent a letter on October 19th warning that his client is in danger surrounding the ongoing dispute over Batei Warsaw and the hekdesh. He added that there are those who believe his client is responsible for incidents in which the integrity of the son of the Gerre Rebbe Shlita was compromised, and this just is not so.

He called on police to take immediate action towards preventing an escalation in the violence. Today he asks senior police commanders “Where were you. The writing was on the wall!”