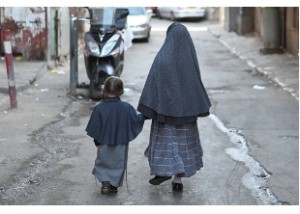 [LETTER FROM EIDA IN EXTENDED ARTICLE] Eida Chareidis affiliated rabbonim convened in special session on Sunday night; the eve of 17 Cheshvan to discuss what they feel is the alarming increase in extremism among its constituents, referring to the break-off faction that has earned the name “Taliban” due to their dress code for females which mimics a Taliban lifestyle, not that of a chareidi woman.

The Rabbonim Shlita heard statements from husbands whose wives have been attracted to the sect, listening for three hours. One of the cases included a woman who decided to give birth at home for reasons of modesty, placing herself and the newborn in a measure of danger. The rabbonim heard some bizarre tales that are the reality of the husbands and households of women that now feel aligned with their new lifestyle, one they feel provides the ultimate in Jewish female modesty.

Another case, quoted by Chadrei Chareidim, speaks of a young girl who is a member of the cult, and she was badly burned in an accident that occurred in the home. When they arrived at Hadassah Ein Kerem Hospital, they demanded a female address their medical needs, not a male physician. When they hospital did not comply, they left and sought private medical care, which may have compromised her overall health due to the serious nature of the burn.

After listening to the stories for three hours, the rabbonim convened for 45 minutes and a decision was made to actively combat the cult, a change from the current policy of sitting back and taking a passive approach.

One of the dayanim shlita warned that this cult is quite dangerous, and the lifestyle it represents has no place in Halacha or Yiddishkheit. A sharply-worded letter was released against the cult, stating in absolute terms that one may not join this cult and members are no associated with the Eida community. 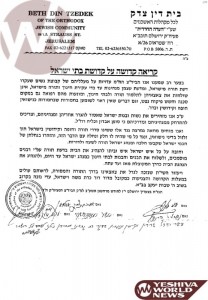 “To our sorrow, we the Badatz have listened to testimony regarding the inequities of these women that have uprooted Torah from Israel, acting on their own, adopting a lifestyle that is void of Torah and educational values. They do not send their offspring to talmid torah and schools; they prevent receiving medical care, even in life-threatening cases, as well as issues concerning matters which are not fitting to be discussed, pertaining to chupah and kedushin etc.

“Therefore, we are warning Jewish women and girls that it is prohibited to join them and one must distance oneself from their customs and their ways, since ultimately, they will chas v’sholom lead to destruction and annihilation.

“We strongly protest those who have taken upon themselves to change the Torah way regarding chupah and kedushin, to the point of being contemptuous towards marriage, opposing that which is an integral component of this and their affront to Chachmei Yisrael that have set Jewish tradition and law for current times and all future generations…”

The badatz has stated it will act harshly to those who place their children in danger and a vaad is being established to monitor cult activities. In case of need, the badatz will cooperate with social work and welfare agencies for the good of the children towards removing children from such homes.

What appears to have prompted the badatz special session was the case advertised by Chadrei Chareidim in which a chosson from Meah Shearim was married for a second time without giving his first wife a get. A week later, he did give the get via the beis din of HaGaon HaRav Nissan Karelitz Shlita.