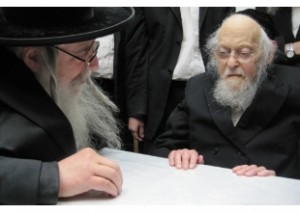 Following is a transcript of the conversation as reported by Chadrei:

When the rebbe walked in, the rav picked himself up to say “Baruch HaBa”. The rebbe wished R’ Elyashiv “mazel tov” on the engagement of grandchild, adding “when coming in the time of simcha, it is a good sign and HaKadosh Baruch Hu will assist from here”.

How are you and how are things in the yeshiva?

Baruch Hashem, they are sitting and toiling in Torah.

Someone recently asked me if in our times it is better to write a sefer Torah or donate money to support Torah learning.

Grandson Rav Rimer (RR) entered the room at this point and explained for Rav Elyashiv the rebbe wishes to know which is preferable.

But a sefer Torah is also read for the rabim.

This is not considered a mitzvah for the rabim.

What about the supporting an individual’s learning. Is this more important than a Torah?

Certainly contributing money to a yeshiva is the most important.

My father the Shefa Chaim said that in our times, those who study Torah are the poor ones and we must provide for them to support the learning. Torah comes before all else.

Rav Elyashiv’s son-in-law Rav Zilberstein (RZ) is present as well. I would like to explain to my teacher and father-in-law that I test the bochrim quite a bit.

From the yeshiva of the rebbe, Yeshivas Sanz. There are bochrim there who are truly expert in Shas in addition to those who compete in the Mifal HaShas.

By us in Ramat Elchanan, when I see a bachur or avreich that has no free time, even on Friday afternoons and motzei Shabbos, sitting in beis medrash and learning Torah, I know that this is a talmid from Sanz.

The late rebbe taught his chassidim that there is no such thing as free time. Sit and learn – there are young bochrim there who know quite a bit. Mamosh a wonder.

If my father-in-law says “fine”, then in Shomayim they are saying fine too.