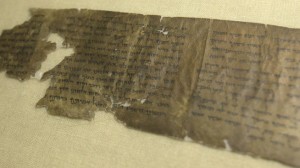 A well-preserved 2,000-year-old scroll of the Ten Commandments is going on display for the first time in New York City.

The tiny scroll will be shown beginning Friday at the Discovery Times Square exhibition space for 10 days before returning to Israel.

The parchment dates back to between 50 B.C. and 1 A.D. It must be kept in a light-and-humidity controlled environment to avoid deterioration. The scroll was discovered in a cave near the Dead Sea in 1952.

The scroll is on display with a group of approximately 900 other scrolls that were originally discovered in a cave near the Dead Sea by Bedouin shepherds between 1947 and 1956.