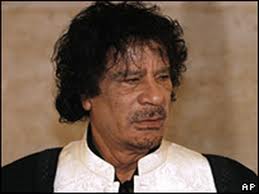 According to a report appearing on the Intelligence Online website, the daughter of late Libyan dictator Muammar Kaddafi is seeking political asylum in Israel. The report states that Aisha Kaddafi has hired the services of Nick Kaufman, a former prosecutor assigned to the Jerusalem District Prosecutor’s Office to advance her cause.

Aisha, 35, fled Libya together with her mother and a number of brothers, seeking refuge in Algeria, where she has given birth to a son. She fears however that local government officials will eventually give into demands from the new Libyan regime and she will face extradition.

According to reports that seem to emanate from friends of Aisha in Europe, she believes the only country where she will feel safe is Israel, and she is advancing efforts towards obtaining political asylum with the realization that her chances of receiving asylum are not particularly good. The report adds that she also contemplated enlisting the professional services of Prof. Alan Dershowitz.

The report concludes that there have been no charges filed against Aisha. Actually, she has filed a motion with an international court seeking to learn of the circumstances that surround the deaths of her father and brother, both found murdered after being taken captive by revel forces.