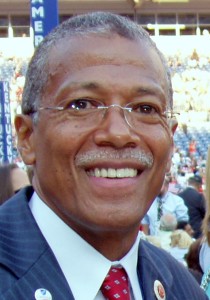 Robert Jackson, a City Councilmember from Harlem and the only Muslim in the body, defended police commissioner Ray Kelly today against charges that he should resign.

Critics are calling for Mr. Kelly to resign after it was revealed that the NYPD screened repeatedly a movie called “The Third Jihad” that depicts Muslims as violent extremists. At first, NYPD spokesman Paul Browne said that the video was screened just a few times and that Mr. Kelly did not participate in the making of the film. Both accounts turned out to be false.

Asked if it was appropriate for the video to be screened for members of the NYPD, Mr. Jackson said, ” I am not going to pass judgment on that.”

He added, “The most important thing for me is the safety and security of the people I represent.”

“This is focusing on those extremists Muslims that are trying to do negative damage wherever it leads them, so obviously in my opinion I don’t support this extreme situation where anyone is going to be killed in Islam trying to be spread throughout the entire world,” he said. “It was produced by someone who is a Muslim himself. I initially thought from reading about it that it cast a negative image on all Muslims throughout the world. In my opinion it does not. It focuses on the extreme Muslims that are trying to hurt other people.”