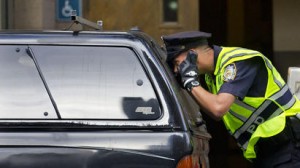 New reported information shows that the New York City Police Department has been monitoring people based specifically on their religion.

According to documents obtained by the Associated Press, the NYPD kept secret files on businesses owned by second- and third-generation Americans, specifically because they were Muslims.

The AP says the department’s secretive Demographics Unit was assigned to investigate the area’s Syrian population in 2007 – but excluded Syrian Jews and Christians from monitoring.

Attorney General Eric Holder said yesterday he was “disturbed” about previous reports of the NYPD’s surveillance of mosques and student organizations in New Jersey.

NYPD spokesman Paul Browne issued a statement that reads in part, “NYPD surveillance has resulted in terrorist arrests, including in New Jersey, and that was done within federal guidelines.”