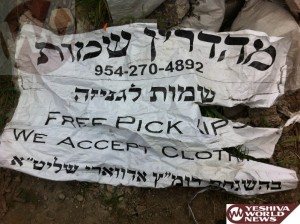 For the second time in two days, another truck loaded with Shaimos has been found – this one in Williamsburg. The truck was found parked at a fire hydrant on Williamsburg Street West and Flushing Avenue. Sources tell YWN that a photographer for the weekly “Dee-Voch” magazine was driving on the street when he noticed a suspicious truck on an empty street. In fact, the truck was the only truck parked on the entire street (as it is a no parking zone) and was parked by a fire hydrant.

Beneath the truck garbage bags full of Shaimos were found as well.

It should be noted that in both incidents, there were posters inside both trucks announcing the following (click on image above to enlarge it):

In the first story, the truck was found abandoned on 15th Avenue and 62nd Street. Besides for a loaded truck of Shaoimos, the nearby train tracks had Shaimos strewn all over. Misaskim Volunteers were collecting the Shaimos to ensure a proper burial.

Many are calling for new regulations to prevent this from happening again in the future. It was obvious that most people were aware about the unkosher practices of these so called “shaimos collectors” as similar occurrences began to circulate as soon as the discovery was made.