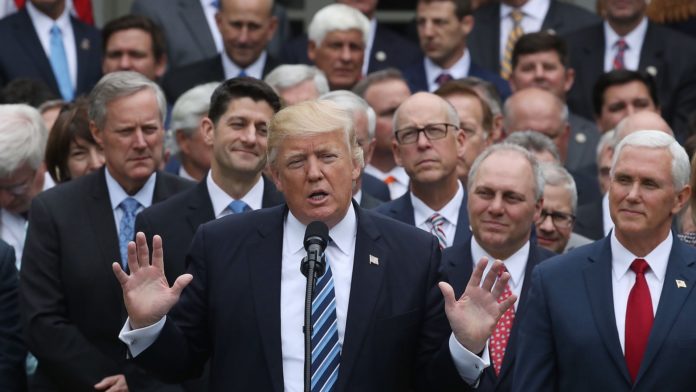 The Republican Party will be rewarded for doing “what’s right” by voting to overhaul a “failing and collapsing” health care system, a top aide to President Donald Trump asserted as Democrats and at least one outside group began laying the groundwork to challenge the GOP for control of the House in the 2018 midterm election.

The health advocacy group Save My Care on Monday announced the launch of a six-figure TV and digital advertising campaign beginning this week, targeting 24 Republican House members who voted last week to repeal the health care law enacted under President Barack Obama.

But White House chief of staff Reince Priebus scoffed at the notion that Republicans will lose control of the House in 2018. He said the bill that narrowly cleared the House last week and which faces significant revision by the Senate will be an improvement over the current system of limited choice and rising costs.

“There are some times in life you have to do what’s right, not what’s politically expedient,” Priebus said Sunday. “We’re going to do something better and we’re going to do our job as legislators to get this thing done. I think that the Republican Party will be rewarded.”

House Speaker Paul Ryan, R-Wis., said he was not concerned about political fallout because of the vote.

“We’re keeping our word,” Ryan said. “People expect their elected leaders, if they run and campaign on doing something, they expect them to do that. And that’s what we’re doing.” Ryan argued that “we would spell disaster for ourselves, politically … if we go back on our word.”

House Minority Leader Nancy Pelosi, D-Calif., gleeful at the prospect of potentially reclaiming the House gavel in 2018, told Republicans they will “glow in the dark” over the vote.

The party that controls the White House traditionally loses seats in Congress in the election that follows a presidential inauguration. Unknown at this point, 18 months before the election, is how the health care vote could complicate that.

Among the lawmakers being targeted by Save My Care’s campaign is Tom MacArthur of New Jersey, the moderate Republican who helped revive the bill. MacArthur wrote an amendment that satisfied some lawmaker’s concerns about how the bill would treat people with pre-existing medical conditions.

Another target is Rep. Dave Brat of Virginia, a member of the House Freedom Caucus, the group of conservative Republicans whose objections to an earlier version of the bill helped scuttle a House vote scheduled for late March.

Save My Care says it will emphasize the lawmakers’ support for a bill that congressional auditors have said will cause 24 million people to lose coverage over 10 years. The campaign is slated to run in congressional districts in 15 states.

A political group with ties to the House Republican leadership, American Action Network, said Sunday it was buying $500,000 in television time to promote the health care bill. The ad will focus on key elements of the American Health Care Act and thank Ryan and fellow Republicans for “keeping their promise” on the health care issue, the group said.

As the focus of the health care debate shifted to the Senate, Trump on Sunday urged Senate Republicans to “not let the American people down.”

Some senators have already voiced displeasure with the bill that cleared the House last week by a vote of 217-213, with all the “yes” voted supplied by Republicans, citing concerns over potential higher costs for older people and those with pre-existing conditions along with cuts to Medicaid. Democrats oppose the effort to dismantle Obama’s health care law.

“I hope that current members of Congress recall that it actually doesn’t take a lot of courage to aid those who are already powerful, already comfortable, already influential,” he said. “But it does require some courage to champion the vulnerable, and the sick and the infirm.”

Sen. Susan Collins, R-Maine, a moderate who also has concerns about the GOP bill and whose vote will be critical, said the Senate will “start from scratch” and not consider the House bill.

“We’re going to draft our bill, and I’m convinced we will take the time to do it right,” she said.

Trump, eager to deliver on a top campaign promise, sought Sunday to pressure Senate Republicans on the issue.

“Republican senators will not let the American people down!” he tweeted from his home in central New Jersey, where he spent a long weekend. Trump has said “Obamacare” is failing as insurers pull out of markets, forcing premiums and deductibles to rise.

The House bill would eliminate fines on people who don’t buy policies and erase taxes on health industry businesses and higher earners. It would dilute consumer-friendly insurance coverage requirements, like prohibiting higher premiums for customers with pre-existing medical conditions and watering down the subsidies that help consumers afford health insurance.

Major medical and other groups, including the American Medical Association, opposed the House bill. Some Senate Republicans, including Rob Portman of Ohio, Shelley Moore Capito of West Virginia, Cory Gardner of Colorado and Lisa Murkowski of Alaska, object to cutting $880 billion from Medicaid.

The ACA expanded Medicaid with extra payments to 31 states to cover more people. The House bill halts the expansion, in addition to cutting federal spending on the program.

Collins and Ryan appeared on ABC’s “This Week” and Priebus was on “Fox News Sunday.”