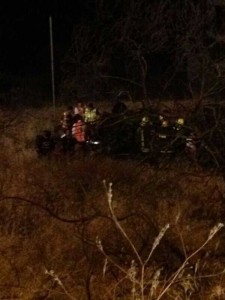 The accident claimed eight lives. There was only one survivor from the passengers of the vehicle, a 7-year-old girl who escaped with relatively minor injuries, but her entire family is gone.

The call arrived at Ichud Hatzalah at 01:25, reports of a vehicular accident on Derech Menachem Begin near Ulpana Junction in Tiveria. It appears the driver of the minivan lost control of the vehicle. The survivor, the girl, was found in the bushes, thrown from the vehicle which was engulfed in flames. She was transported to Poriah Hospital in Tiveria, listed in moderate condition. She was moved to Rambam Medical Center in Haifa during the night.

Tiveria police received a call for a vehicle with brake failure, dispatching a unit. While they were on the phone the dispatcher heard screams from the vehicle and the arriving unit saw the minivan crash and flip over, then burst into flames.

Firefighters, EMS and rescue personnel were horrified as the site after the flames were extinguished. The magnitude of the tragedy quickly became apparent to all on the scene, as well as the reality that there was nothing to do but to address the issue of kovod ha’meis.

The victims appear to be from one family, chareidim from the north, parents in their early 40s and their six children, a 17-year-old daughter, 16-year-old twins, 11-year-old girl, 9-year-old girl, and a three-year-old girl z”l.