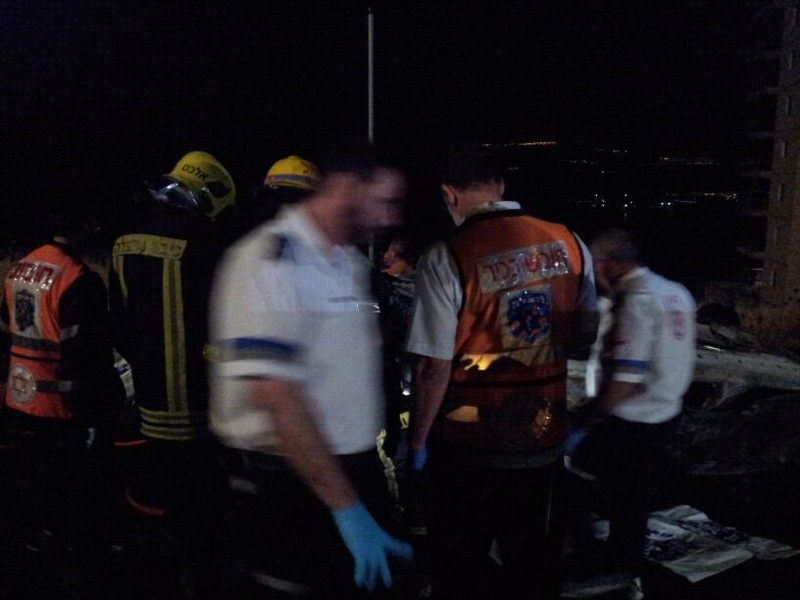 The 7-year-old girl who survived the accident in Tiveria during the night, 1 Sivan 5772, told rescue workers “I tried to wake abba and ima but they would not get up”.

As was reported earlier, she was the only survivor, her entire family killed in the crash R”L.

Area resident 52-year-old Eli Lankry told Walla News “I was in bed watching TV and at about 01:20 my wife and I heard screams and then an awful smashing noise. We did not understand what was taking place. When I got out of bed to look out the window I saw a vehicle in flames. I ran out without a shirt but the vehicle was engulfed in flames. I could not do a thing. It looked like a battlefield. The entire area was scorched.

“Suddenly, I saw a small girl running to me shouting ‘they are all dead! There’re all dead!’ She appeared quite confused. I gave her a hug and brought her to police that already arrived on the scene. I went back to the burning vehicle and began shouting at the people, but realized there did not hear me – it was too late, they were all dead. I began looking in the area of the vehicle for people who may have survived. Sadly, only the girl survived. It was horrific. It was total silence”.

Tiveria Mayor Zohar Oved arrived at the scene too, simply stating the “sight was catastrophic”.

A neighbor of the family, Yigal Lugosi told Galei Tzahal (Army Radio) “The news arrived in our community during the early hours. The entire community is shocked and stunned. We simply cannot digest the magnitude of what occurred. Anywhere you walk you hear people crying and screams. It’s a tragedy. It was a wonderful family. The tragedy cannot be described. The community is simply torn apart”.