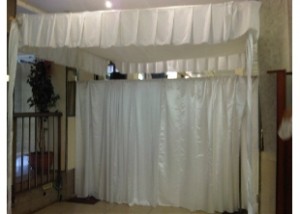 There was a unique chasnah in Bnei Brak earlier this week, a young couple affiliated with the shawl chareidim or “Taliban” as some prefer to call the women who are literally covered from head to toe.

Only invited guests were permitted in, making sure no one crashed the simcha event. Those responsible for setting up arrived hours ahead of the simcha to cover the windows and set the double mechitza into place. The mechitza was unusually high, as well as two layers of heavily lined material to make absolutely certain the view was totally blocked from either side.

Every possible effort was made to eliminate any possibility of any eye contact between men and women throughout the simcha.

The photographer remained on the men’s side only, and there were no photos of the women at all, not videos or stills.

There was total and absolute separation, even when it came to serving. Waiters were compelled to place food at a designated station near but outside the women’s area, and volunteers among the female guests served the food only after they confirmed the waiters had gone.