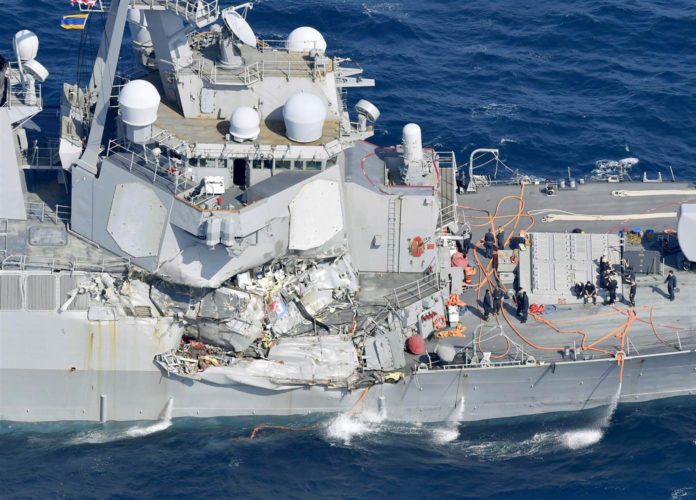 The U.S. Navy says the bodies of sailors who went missing in the collision between the USS Fitzgerald and a container ship have been found aboard the stricken destroyer.

The Navy says in a statement that searchers had gained access to the spaces that were damaged during the collision. A total of seven sailors had been missing since Saturday’s crash off Japan’s coast.

The Navy says the remains are being transferred to Naval Hospital Yokosuka where they will be identified.

It says the families are being notified and being provided the support they need during “this difficult time.” The names of the sailors will be released after all notifications are made.

The USS Fitzgerald was back at its home port in Yokosuka Naval Base south of Tokyo by sunset Saturday, its crew lined up on deck. The Philippine-flagged container ship was berthed at Tokyo’s Oi wharf, where officials began questioning crew members about the cause of the nighttime crash.

After helping stabilize the USS Fitzgerald, the destroyer USS Dewey joined other American and Japanese vessels and aircraft in the search for the missing sailors.

At least three other Navy sailors were injured in the crash.

Family members were frantically seeking news, appealing via social media for calls from sailors aboard the ship.

“Everyone knows everyone. We’re one big, giant family,” said Saucedo, who said news of the collision hit home. “You could have been in that situation. It could have happened to you. I have seven brothers and sisters missing on that ship. It’s pretty heartbreaking.”

Saucedo, who still has friends aboard the vessel, said the crew is trained for many scenarios, including collisions. He said the area of the ship that was struck and the timing of the accident make the response more difficult.

“Imagine the ship coming in and you get hit and water is coming in to where you sleep. A very rude awakening, I’m glad to hear a lot of people made it out,” said Saucedo.

The U.S. 7th Fleet said in a statement that the crash damaged two berthing spaces, a machinery room and the radio room. Most of the more than 200 sailors aboard would have been asleep in their berths at the time of the pre-dawn crash.

Water was being pumped out of flooded areas, and it was unclear how long it would take to get into the crushed mid-right side of the ship once it was at the pier in Yokosuka, the statement said.

“This has been a difficult day,” said Vice Adm. Joseph P. Aucoin, the commander of the 7th Fleet. “I am humbled by the bravery and tenacity of the Fitzgerald crew. Now that the ship is in Yokosuka, I ask that you help the families by maintaining their privacy as we continue the search for our shipmates.”

The USS Fitzgerald’s captain, Cmdr. Bryce Benson, was airlifted early Saturday to the U.S. Naval Hospital in Yokosuka and was in stable condition with a head injury, the Navy said. Two other crew members suffered cuts and bruises and were evacuated. It was unclear how many others may have been hurt.

The Navy said that the collision occurred 56 nautical miles southwest of Yokosuka, home to the 7th Fleet.

“Right now we are focused on two things: the safety of the ship and the well-being of the sailors,” said Adm. Scott Swift, commander of the U.S. Pacific Fleet.

The Japanese coast guard said it received an emergency call from the container ship, the ACX Crystal, reporting the collision at around 2:20 a.m. local time on Saturday. It was questioning crew members of the ACX Crystal, which is operated by the Japanese shipping company Nippon Yusen K.K., and was treating the incident as a case of possible professional negligence, said Masayuki Obara, a regional coast guard official.

“Thoughts and prayers with the sailors of USS Fitzgerald and their families,” President Donald Trump said on Twitter. “Thank you to our Japanese allies for their assistance.”

The ACX Crystal weighs 29,060 tons and is 730 feet long, the coast guard said, much larger than the 8,315-ton Navy destroyer. The container ship’s left bow was dented and scraped, but it did not appear to have sustained any major structural damage.

Conditions were clear at the time of the collision, though Yutaka Saito of the coast guard said the area is particularly busy with sea traffic.

The names of the missing sailors were being withheld pending notification of their families. U.S. Navy personnel set up support and counseling services to help families as they sought updates on crew members.

“Just heard the sweetest voice and saw a wonderful face. He’s okay. Thank you all for the prayers,” Rita Schrimsher of Athens, Alabama, tweeted after speaking with her 23-year-old grandson, Jackson Schrimsher, via Facetime.

“It could have been worse, so we’re grateful,” she said by phone.