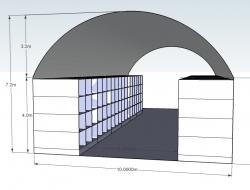 Jerusalem’s Kehillos Yerushalayim Chevra Kadisha, the largest in the city, is working to develop its plan for burial caves in response to the severe land shortage. The plan is based on Rome’s catacombs.

The pilot project will encompass a 50 meter length and 10 meter width, with a height of 6.5 meters. This will result in four rows of alcove graves on either side of the tunnel for a total of 400 burial slots.

According to the designers the advantage of this method of burial is that it is not limited to the ground since the tunnel can be established at different angles and at different heights so that burial beneath the surface potential is almost limitless.

The method of burial tunnels existed during the time of the Sanhedrin, albeit in limited use. At that time, the burial caves were the lot of the upper classes due to the expensive burial cost.

Due to increased accessibility and digging technology, the chevra kadisha decided to move ahead with the idea, now moving to the pilot program. The estimated cost of digging a grave one will be about 8000 NIS, similar to current burial cost.

Chananya Shachor, the general-manager of the chevra kadisha explains that he hopes the powers that be will grant the required building permits to permit advancing the project which is in the final engineering evaluation stage. If the pilot is successful, it will significantly contribute to solving the burial problem for several hundred years Shachor explained.

The project will be handled by the Rolzur Tunneling Company, experts in the field. This company constructed tunnels for the train on the Jerusalem-Tel Aviv line as well as the Arazim Tunnels on Highway 1.

If the plan works as anticipated, the chevra kadisha plans to construct a massive burial building in Har Menuchos that will encompass 25 dunams (6.4 acres) and house 35,000 burial plots.