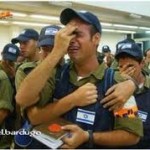 A last tefilas shachris was held for many Ulpana residents as the government eviction begins today, Tuesday, 6 Tammuz 5772. Among the mispallalim was the community’s rosh yeshiva, Rav Zalman Melamed, who wanted to give the 33 families being ousted from their homes a chizuk. The rav on Monday addressed teens, calling upon them to remain peaceful. The rav has explained over recent days that despite the painful decree, he was willing to go along with the decision to accept 300 homes in the community of Beit El in exchange for a commitment of a non-violent eviction because he feels the violence had to be avoided at all costs.

Rav Melamed explained numerous times that he did not ‘sell out’ for housing but his primary consideration was how to avoid a confrontation between security forces and residents and their supporters. The rav felt the machlokes was the worst possible scenario, thereby agreeing to the government offer, albeit with a heavy heart.

The remainder of the families is to be moved on Thursday, 8 Tammuz and the plan calls for all of the 33 families to be settled in their temporary homes by shabbos.

A representative of the families being ousted from their homes, Didi Dickstein released a statement, telling the press that they have agreed there would be no violence, but they will not be cooperating with eviction forces. “I simply did not have the strength to pack. The court’s decision was not a proper one and I am certain another solution could have been found to solve the problem”.

The families are being evicted by the government, with the latter complying with a High Court of Justice ruling declaring the homes illegally built, on privately owned Arab land.

In line with the court’s ruling, the families must be out by July 1st. The structures will be moved to the new location within the 90 days that follow.

Many fear that complying with the High Court’s ruling will set a dangerous precedent in which Arabs will use the Israeli judicial system to challenge the legality of homes throughout Yehuda and Shomron. Nevertheless, an effort to pass a law to circumvent the court’s decision was defeated in Knesset. Right-wing lawmakers explained they feared that passing such a bill into law would delegitimize Israel in the eyes of the international community.