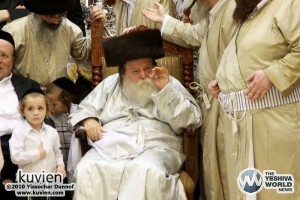 Only a few hours after returning from a lengthy fundraising trip to the United States the Toldos Avraham Yitzchak Rebbe Shlita summoned gabbaim and chassidim to gather for an urgent kenos. The rebbe explained he is setting up a committee that will have wide-ranging authority to oversee technological devices, such as phones and internet. The rebbe spoke out forcefully against the danger of the technological devices purchased today, emphasizing the need to keep such devices far away from families in the chassidus.

The rebbe reportedly also addressed concerns over a sharp decline in tznius among the women in the chassidus.

One of the matters the rebbe wishes to place an emphasis on is non-kosher cellular phones, telling his rabbonim that if an avreich is apprehended with a “treif phone” they are empowered to break the phone, to smash it and they will not be liable for damages.

One of the more extreme rulings being reported in the rebbe’s name is that if they find a treif phone hidden somewhere in the yeshiva they may even take it on shabbos and smash it, explaining the reality necessitates chilul shabbos.

This committee will be responsible to address ‘gashmiyus” matters, including fundraising, running the yeshiva, beis medrash and talmid torah.

Chassidim who attended the urgent meeting where shocked at the hard line taken by the rebbe. Some chassidim explain that stories have been circulating in the chassidus of a breach in the community regarding the use of treif phones and the internet.

The rebbe instructed chassidim that if they are aware of someone who compromises tznius standards as defined in the chassidus they should distance themselves from such a person.