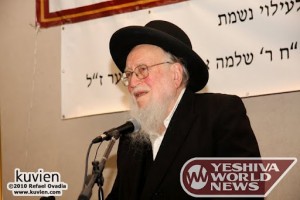 HaGaon HaRav Yitzchok Sheiner Shlita, Rosh Yeshiva Kaminitz and a member of the Moetzas Gedolei Torah speaks out against what the rav calls “The Shas HaShmad” (שעת שמד). The Rosh Yeshiva addressed hundreds of talmidim to bring them up to date regarding the worrisome situation in Eretz HaKodesh — the imminent drafting of tens of thousands of avreichim.

“We are in a “shas hashmad” and as such, we must act differently, there are different halachos. They want to eliminate torah and we must be prepared to go to prison”. Rav Sheiner read the letter sent by Rav Baruch Ber of Kaminitz regarding army service, telling his talmidim everyone must go to prison.

The rosh yeshiva interrupted the regular seder to gather his talmidim to share his concerns, his trepidation over the impending “gezeira in Eretz HaKodesh”.

“I don’t know if the tzibur is aware of the situation in Eretz Yisrael. They wish to uproot the yeshivos. Every ben torah at the age of 18 will be required to enter into the army. There will be no yeshivos. Anyone who does not report will be hit with large fines. We are speaking of 100,000 NIS and other measures against them as well. The gezeira is ready for implementation and this means this is a שעת שמד as we have known in the past.

The rosh yeshiva adds “They hate the torah. They hate bnei torah and want to eliminate the torah, and therefore, we are obligated to act differently than our norm. We are compelled to strengthen our learning and mesirus nefesh to a level we have never done. There is a new reality and this must be our הלכה למעשה.

“This is the “מכה בפטיש” that we have not know, but it is all but certain there will be a gezeira that will close yeshivos and we must be ready to go to prison and even worse”.

Everyone must look at the introduction of ברכת שמואל, the letter from Rav Boruch Ber regarding strengthening torah davka in times like this, and he paskens that during times such as these, one must be moser nefesh, and if possible, to be moser nefesh that the yeshivos should not be closed, bringing a proof from the gemara”.

The Rosh Yeshiva concludes by instructing every talmid to strengthen limud torah as one has never done before in one’s life. Not to waste a single moment of one’s life, not to hang out in the streets, but to go to sleep at night immediately after one’s seder.

“I don’t say what you should do but in Volozin they learned around the clock”, repeating these words as if to instruct talmidim that this is what they must attempt to do as well.