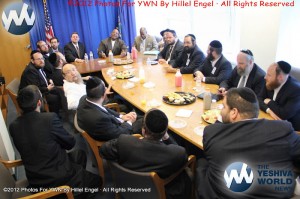 Senator Sampson thanked participants for taking the time to attend the meeting and continuing to maintain a strong relationship with democratic leadership, assuring attendees that their concerns will be well represented in Albany. Senator Sampson stressed the importance of maintaining open lines of communication between community representatives and elected officials, giving community leaders a voice in Albany and ensuring that those who hold public office can advocate for their constituent’s needs. Senator Sampson also discussed the recent passage of the TAP program and the efforts being made to increase minimum wage, which will be a boon to those who are struggling to make ends meet.

Each of the four senators present at the meeting addressed the group, assuring them that they stand as staunch advocates for the Jewish community, with Senator Squadron, who represents the Williamsburg community, thanking Senator Sampson for his efforts on behalf of all New Yorkers, particularly residents of Brooklyn.

Numerous issues were addressed at the meeting including policy changes, budget issues and job training programs that could potentially be implemented by the state. Shomrim coordinators from Flatbush, Borough Park and Williamsburg brought up the urgent need for security cameras within all communities and neighborhoods and Senator Adams vowed to continue to advocate for cameras in all neighborhoods, including Crown Heights, Williamsburg, Borough Park and Flatbush. Also discussed was the plight of Jacob Ostreicher, who has been held for over one year in a Bolivian prison and Senators Sampson and Adams assured participants that they are working closely with the Department of State on this matter.

“This was a frank, open exchange and there was a strong sense that this was a dialogue that allowed for back and forth between participants. It is always important for government to hear first-hand what is on the mind of local leaders and that goal was certainly accomplished today.” Said a community leader in attendance.