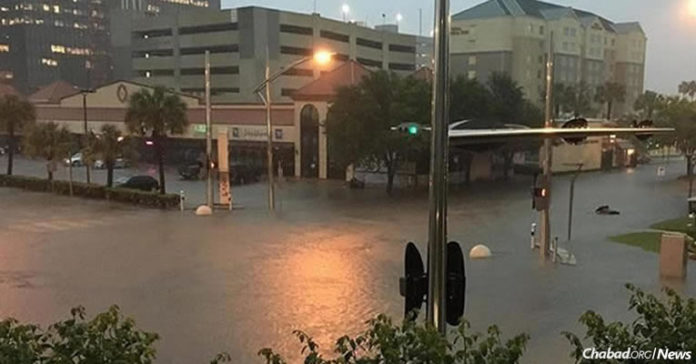 Homes, cars and streets throughout Houston are under water as torrential rains from Hurricane Harvey—now downgraded from a Category 4 hurricane to a tropical storm—continue to drench the city and cause catastrophic flooding throughout the region. At least five people have died as a result.

More than 15 inches of rain has fallen as of Sunday morning in some parts of the city, and people are being urged to stay indoors since the water is rising very quickly. In the Meyerland neighborhood, a center of Jewish life in the city, more than 14 inches of rain have fallen.

“I am sad to report that many of our friends who flooded in the recent past are flooded once again, and there are many others who have never been flooded before,” says Rabbi Chaim Lazaroff, co-director of Chabad of Uptown with his wife, Chanie. “The rain is not stopping.”

The Lazaroffs, who live in the Galleria area, which traditionally is not prone to severe flooding, have a number of people staying with them who came for Shabbat lunch and were stuck when the rains flooded them out of their homes.

“There is a lot of tension, and the hard part is that it’s far from over,” reports Chanie Lazaroff. “There’s a lot of rain coming, and safety is the most important thing.”

More than 1,000 water rescues have been reported so far, with responders rushing to save people from flooded homes and stranded cars. Houston city officials note that emergency services are at capacity and warn residents to “shelter in place,” and not call 911 unless they were in imminent danger.

As the waters continue to rise, families have taken to putting life jackets on their children to ensure that they will stay safe in an evacuation. At least one Jewish community member was reportedly stuck in his car overnight.

In the Bellaire neighborhood of Houston, Rabbi Yossi Zaklikofsky, co-director of The Shul of Bellaire with his wife, Esty, reports that many homes are now flooded, including those that have never flooded before. The rabbi says his first floor is covered with nearly three inches of water, and that he and his family, including five children under the age of 10, have moved to the second floor of their home.

Gov. Greg Abbot declared a state of disaster for 30 counties in Texas on Wednesday, closing roads, schools and businesses in Houston, San Antonio and numerous other areas on Friday. They will remain closed all week, as will many government offices. The Lazaroffs have been in touch with community members by phone and through social media, and after reports of significant damage have set up a disaster relief fund.

“Right now, it’s about making sure everyone has a safe and dry place to go,” says Chanie Lazaroff.

The scene in the predawn hours on Sunday morning is a sharp contrast to a rainy Shabbat morning in Houston. Jews in the area were able to get to shul for services because the heavy rains didn’t start until later in the day.

More than three hours to the south in Corpus Christi, which sits on the Gulf of Mexico and had been expected to be hard hit on Friday night by the first blast of the storm, the Chabad emissaries were ordered to evacuate along with the general population prior to Shabbat.

Taking the Torah scrolls with them to ensure their safety, Rabbi Naftoli and Nene Schmukler, co-directors of Chabad Coastal Bend, left with their young children to spend Shabbat with the Chabad emissaries in McAllen, Texas, away from the path of the storm.

“We know from friends that there is severe damage to Corpus Christi and surrounding areas,” says the rabbi, who, along with his wife, is expected to return to the city on Sunday.

They will take with them donations of bottled water, generators, dry clothes and other items that have been collected by Chabad of the Rio Grande Valley in McAllen, co-directed by Rabbi Asher and Dina Hecht.

“There are community members with stores in the city of Port Aransas that are completely demolished. We are coordinating with people locally, as well as with those who want to help with supplies, and who want to come and help physically,” says Schmukler, who has also set up a disaster relief fund. “We are getting calls from around the world; it is amazing to see the outpouring of care and support.”