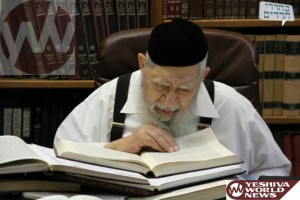 Officials are preparing for the arrival of 20,000 people at tonight’s (the eve of 12 Menachem Av 5772) people at Jerusalem’s Teddy Stadium for the Shas Siyum HaShas headed by Maran HaGaon HaRav Ovadia Yosef Shlita. The number includes 12,900 people who purchased tickets for the event. A number of roshei yeshiva and admorim were invited as well. Last week YWN-ISRAEL reported that Shas leader Minister Eli Yishai traveled to the Belzer Rebbe Shlita to personally invite him to attend as Chacham Ovadia’s guest.

The musical accompaniment will be led by R’ Moshe Mordechai (Mona) Rosenblum and MBD. Organizers stress that only ticket holders will be permitted to enter the event, admitting they fear thousands of people who were unable to purchase a ticket will likely come in the hope of getting in. Seeking to accommodate the demand, a hall in the Jerusalem Ramada Hotel was rented for a live broadcast of the event.

Police report that no one will be permitted to park a private vehicle in the area of Teddy Stadium, urging ticket holders to use public transportation and the shuttle buses from Binyanei Ha’uma.

Gates open at 17:00 and close at 19:00. Ticket holders will receive CDs, seforim and other customized items designed especially for the event.