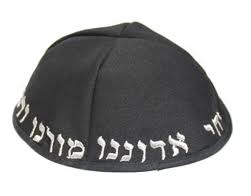 Chabadnikim serving in the IDF who identify with the Meshichist element received a new guideline from the military today. They may no longer wear the so-called ‘Yechi’ yarmulkes that say יחי אדוננו מורנו ורבנו…’.

Chief of the Conduct & Discipline Unit Lt.-Colonel Oren Avraham issued the new order, Ladaat.net reports. The lt.-colonel explains that all yarmulkes with writing are not permitted and this will not be an exception.

He also issued a number of other regulations but they are not relevant to the chareidi soldier.

The new regulation was accepted by the chief of personnel, Major-General Orna Barvibai, and it permits any size yarmulke in any color, but without any and all writing.