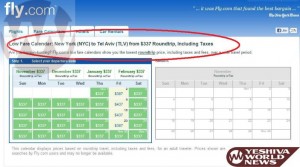 Thousands of people were scrambling to book tickets with El Al Airlines to Israel, Monday morning, after tickets appeared online for less than $400 round-trip. The tickets appeared on Orbitz, Fly.com and other online ticketing outlets – as well as private travel agents.

The deal was also posted on “Dan’s Deals”, a popular daily deal website.

The link was being emailed around, and spread like wildfire all morning. YWN received close to 100 emails asking us to publish the link for people to jump on the cheap fare.

YWN immediately reached out to our contacts at El Al, and were informed that there was a serious error taking place, and asked that we not publish the link until further investigation by El Al officials took place.

Later this afternoon, Sheryl Stein, from the Public Relations Division of El Al, explained to YWN what had taken place.

EL AL had submitted winter promotional fares correctly to an outside company which is responsible for filing airfares for many airlines. That company posted incorrect EL AL fares on several travel web sites. On a daily basis, any published airfare consists of the basic fare, a fuel surcharge and taxes. In this situation, the fuel surcharge was omitted.

Stein says that the error was the outside companies fault and not El Al.

She added that El Al still has no idea exactly how many tickets were sold at the incorrect rates, and it was still unknown if not El Al would honor the tickets.