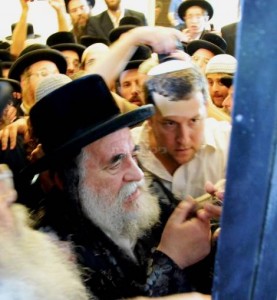 Escorted by Shomron Chief Rabbi Elyakim Levanon Shlita, the Vishnitzer Rebbe Shlita during the night visited Kever Yosef in PA (Palestinian Authority) occupied Shechem. The visit took place during the night, 10 Elul 5772, Monday night to Tuesday morning, with hundreds of chassidim traveling for the special event with the rebbe.

Hundreds of chassidim waited for the rebbe to arrive in Elon Moreh. The rebbe first arrived at Rav Levanon’s home. Also present was the mora d’asra of Yishuv Yitzhar, Rabbi David Dudkowitz as well as the head of the Shomron Regional Council Gershon Mesika.

Rabbi Levanon and Mesika gave the rebbe an explanation of the communities in the area, speaking of the housing, yeshivos and talmidei torah in the Shomron. From there they went to the community shul and to Kever Yosef HaTzaddik.

The rebbe was recited tehillim in a yomtov niggun as the entered the complex. The chassidim began singing as the rebbe affixed a mezuzah on the doorpost of the tziyun. Chassidim then passed by the rebbe to receive a bracha prior to departing. The rebbe also gave a special bracha to Avraham, a son of Ben-Yosef Livnat HY”D who was murdered 18 months ago at the location by PA police terrorists.

As they departed, Mesika stated “This is a historic visit”, explaining that since the site was refurbished about two years ago, ten government ministers have visited but he views the rebbe’s visit the most significant and added that he hopes the tehillim and tefilos recited will act in Shomayim למען עם ישראל, תורת ישראל וארץ ישראל.