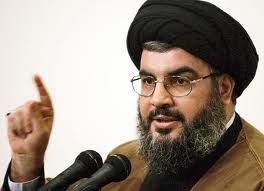 While Israel and the USA monitor events in Syria, sharing concerns over Damascus’ chemical weaponry, Hizbullah leader Sheikh Hassan Nasrallah on Monday night, the eve of 17 Elul 5772 announced he does not need or plan to attack Israeli with chemical weapons, but he will suffice with missiles.

Speaking to Lebanese TV, he stated that he does not have chemical weapons and would not use them, but stressed he can still cause significant harm to Israel.

Referring to his staunch ally, Iran, the terrorist leader explained Tehran’s nuclear program is for peaceful use only. He added that he has heard from Iranian officials that if Israel launches a military strike against the nuclear facilities, the Iranian response would be huge. He added “The Zionist enemy will not be the only target but American bases in the region will also be targeted”.

Just this week YWN-ISRAEL reported that US President Barak Obama sent a message to Iranian President Mahmoud Ahmadinejad via two European nations, telling him that if Iran does not attack American bases and ships in the Persian Gulf, the United States will not jump to Israel’s aid in the event of an Iranian counter strike following a military offensive by Israel. American bases are located in Kuwait and Qatar too.

The terror leader stated he has over 20,000 missiles, but Israeli intelligence estimates place the number at several times that. This includes longer and shorter range missiles, and experts in Israel are aware the terrorist army can fire missiles deep into Israeli population centers.

Some feel Nasrallah hinted at a strike against the Dimona nuclear reactor after he stated that he does not need chemical weapons because his missiles can strike anywhere in Israel and achieve the same results. The Dimona facility is located in Dimona, in the south.

Nasrallah’s statements are in line with the IDF Homefront Command assessments, that all of Israel will be involved if a major military conflict erupts. Former Homefront Command Minister Matan Vilnai stated on numerous occasions that in such a scenario, missiles would be fired into Israel from southern Lebanon by Hizbullah as well as by terrorists in Hamas-controlled Gaza.