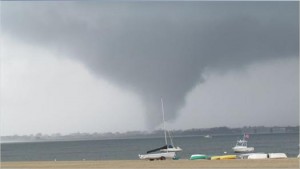 The National Weather Service estimates the tornado that touched down in Queens was 50 yards wide and 600 feet long. The tornado was classified as an EF0 tornado, which has wind speeds between 65 and 85 miles per hour.

A tornado watch was issued for all five boroughs until 9 p.m. Saturday. A tornado warning was previously issued by the National Weather Service for Queens and Brooklyn. That warning ended at 11:30 a.m.

The streets were littered with broken trees and branches, all within a very short time.

In Canarsie, store windows were broken.

So far, no injuries have been reported.