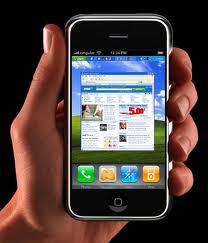 A talmid in the גאון יעקב Yeshiva in Bnei Brak was shocked to see his chavrusa had an iPhone, aware the device has been banned by gedolei yisrael. He told his chavrusa that HaGaon HaRav Shmuel Halevy Wosner Shlita has disqualified one who uses the device from being a witness.

He wished to bring the discovery to the attention of the rabbonim in the yeshiva, but they traveled to the tziyun of the Gra and the Chofetz Chaim.  Therefore, the talmid decided to act on his own, confiscating the iPhone.

The following day, when the rabbonim returned the talmid presented it to the mashgiach, who is quoted as saying “We are going to fulfill the mitzvah of וביערת הרע מקירבך” and he smashed the device.