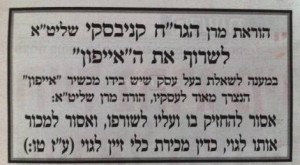 Notices appeared on Sunday morning quoting HaGaon HaRav Chaim Kanievsky Shlita and his adamant opposition to an iPhone. The gadol hador is quoted as responding to a question regarding one requiring the smart phone for business as saying “It is prohibited. It should be burned and one may not sell it to a non-Jew because of the halacha of מכירת כלי זיין לגוי.

The above image is a copy of the notice in Yerushalayim. Click on it to enlarge it.