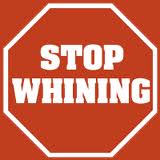 Secretary of State Hillary Clinton says in a new interview that she can’t stand “whining” by women who are unhappy with the work and family choices they’ve made in life and complain that they have no options.

Clinton, in the interview with Marie Claire, was discussing Anne-Marie Slaughter, a former director of policy planning at the State Department who left in 2011. This summer, Slaughter wrote a much-discussed cover story in the Atlantic — “Why Women Still Can’t Have It all” — about leaving her job because of the difficulty of balancing her work at State with the needs of her two teenage boys.

Clinton added, “Some women are not comfortable working at the pace and intensity you have to work at in these jobs. … Other women don’t break a sweat. …They have four or five, six kids. They’re highly organized, they have very supportive networks.”

Lea Goldman, director of features and special projects at Marie Claire, clarified in a statement that the “whining” comment wasn’t targeted at Slaughter.

“We are thrilled that Secretary of State Clinton was able to reflect on her time in office with us, weighing in on work-life balance, obviously a core issue for many American women—and certainly of avid interest to Marie Claire’s readers,” Goldman said. “We want to make it clear that Secretary Clinton’s specific comments about ‘whining’ were not in reference to Anne-Marie Slaughter but, as noted in the story, part of a larger conversation about women in the workplace and striking a work-life balance.”