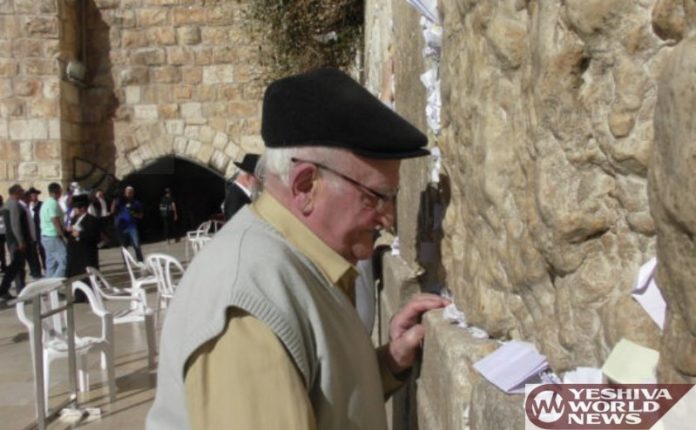 Mr. Avraham Takatch, a native of Donetsk and a Holocaust survivor of about 90, arrived in Israel as a refugee from the battle zones in Ukraine. On Monday, 16 Kislev, he fulfilled an old dream and arrived at the Kosel for the first time in his life with the help of the International Fellowship of Christians and Jews (IFCJ) and the Kosel Heritage Foundation.

“I dreamed about it all my life and here I am,” said Avraham Takatch, with a smile on his face. “This is a great privilege and that I have been able to daven in the holiest place for the Jewish people.” Until now, this place was known to me only from pictures I saw and from the television screen.

Takatch now lives in Rishon L’Tzion, where he and his two daughters and grandchildren arrived in 2014 when they made aliyah, at the beginning of the period of fighting between Ukrainian forces and pro-Russian militias, when the situation deteriorated. “I have already had one difficult war and I did not want my family to go through war either,” he said.

In honor of Takatch’s birthday, his granddaughter decided to celebrate the day in a special way, and contacted the AFCJ hotline for assistance and asked for help in realizing Takatch’s dreams and bringing him to the Kosel. The foundation enlisted to help and provided transportation, arranged convenient and close parking, and made sure that Takatch was able to use a wheelchair.

“I was 14 when the war began in our region. My father was drafted into the Red Army, and our city came under heavy bombing so we decided to flee.” Takatch’s family continued to flee eastward as the German army approached, until they reached Kazan, today the capital of the Tatarstan Republic. Together with his brother, he was sent to work on an agricultural farm nearby, where they worked in agriculture throughout the war years. At the end of the war, the family returned to Donetsk, where there was severe hunger as a result of the ongoing fighting. A few years later Takatch was drafted into the Red Army, where he learned to drive heavy vehicles, which he actually did all his life as a truck driver.

Joel Eckstein, Chairman of the Board of Directors of AFCJ: “We receive hundreds of requests every day from citizens who need assistance in a variety of situations from poverty and wellbeing to such auspicious situations. We assist by thinking out of the box and adapting a personal solution according to the needs and condition of the applicant. This case is particularly moving since it is an elderly person who came to Israel with our assistance and is now receiving assistance with tens of thousands of elderly and Holocaust survivors in Israel.

The Kosel Heritage Foundation said that “the visit of Holocaust survivor Avraham Takatch, 90, to the Kosel, has aroused great excitement among all those who attended the ceremony … We have a golden opportunity to be partners in realizing his dream of reaching the place of yearning for him and for the entire Jewish people. On his face, he described, more than anything else, the intensity of the emotion aroused by his visit to the Kosel.