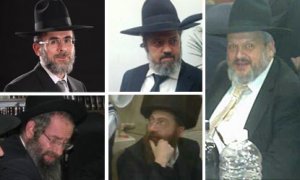 With achdus between Degel HaTorah and Netzach all but a past dream, Netzach compelled to submit its list to the Central Election Committee last week. The party lineup is led by Chaim Epstein, a veteran Degel askan and a resident of Har Nof. He was a talmid in Ponevezh and it was during that period he developed a relationship with Rav Shmuel Rosovsky ZT”L and HaGaon HaRav Shach ZT”L. Kikar Shabbat reports Rav Shach was particularly fond of Epstein. Epstein had a hand in the founding of Degel, served as a party secretary as well as head of Rabbi Avraham Ravitz’s z”l office when the late deputy minister served in the Ministry of Housing. He also served as a councilman in Elad.

The second position went to attorney Moshe Elmaliach, a resident of Ashdod and a former director of the Sheiris Yisrael kashrus. This is a clear signal that Netzach is hoping to attract Sephardi voters as well, perhaps Sephardi chareidim who have become disenchanted with Shas. Elmaliach is a successful businessman and has served in a number of public positions including director-general of Shas’ El HaMayan education network along with the Mayan HaChinuch HaTorani network. He has also served as deputy mayor in Ashdod.

The third slot is held by David Biderman, a Laluv chossid and a brother of Admor Rav Shimon of Lulav ZT”L. Biderman serves as the chassidish representative, hoping to attract chassidim as well as litvish voters. Netzach leaders hope he will bring the disenchanted Agudas Yisrael voters, primarily from the smaller chassidic courts, those not represented in the Agudah lineup. Rav Biderman is reportedly close to HaGaon HaRav Shmuel Auerbach Shlita.

Fourth slot was given to Chaim Ruchamkin, a former talmid of Kol Torah in Yerushalayim. He was close to HaGaon HaRav Shlomo Zalman Auerbach ZT”L and continues to serve as director of the Chochmas Shlomo Yeshiva in Bnei Brak. He too is a former director of the Sheiris Yisrael hashgacha and established the Chanichei Yeshivos Kol Torah in Bnei Brak, known as among the most loyal talmidim of Rav Auerbach.

Fifth spot is held by Shmuel Goldsmith, a well-known fundraiser for Ponevezh, a known askan and bal chessed.

Sixth slot is held by Yeshayahu Wein, a resident of Modi’in Illit. He used to write for Yated Ne’eman, serving as the deputy editor of HaPeles today. He has been an outspoken opponent of talmidim who opt to serve in the IDF as well as a major opponent of the “New Chareidim”, which is represented by the Tov Party.

Seventh slot is held by Yehuda Shemtov, a member of the Modi’in Illit City Council. He is a representative of the Sephardim in the new party.