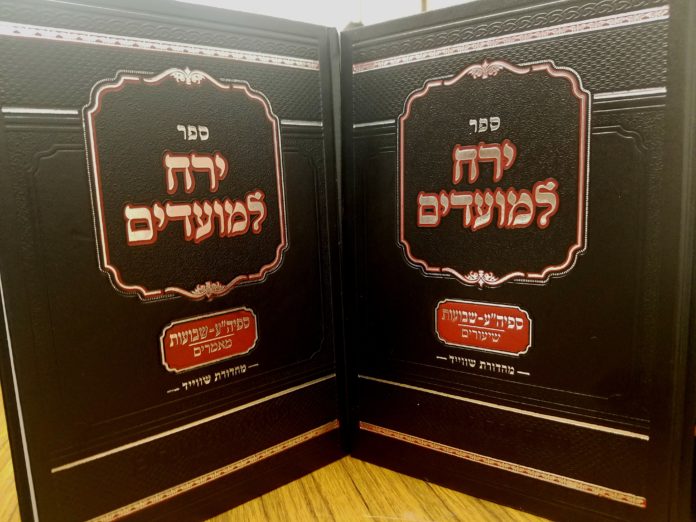 If one were asked to describe Rav Yeruchem Olshin’s maamarim in just one word – it would be “inspirational.”  And now, just in time for Shavuos, we have the complete set of Yare’ach LaMoadim the Schweid Edition – for the final regel.  Like the other volumes, this outstanding sefer will not only take over the Yom Tov, but it will imbue it with deeper meaning and understanding.

Generally speaking, this can either happen in Talmudic and halachic lomdus or in maamarei ruchnius and Hashkafah. Rav Yeruchem Olshin’s new sefer like its predecessors – does it in both.  The first volume (434 pages) is devoted to shiurim in lomdus and halacha.  The second volume is devoted to ma’amarim (492 pages).   The shiurim and maamarim are a compilation of years of thought, and it is easily seen in the sheer depth and exhaustive nature of the material.

THE DEEPER REASON WHY WE LEARN ALL NIGHT

A typical example of the ma’amarim explains the deeper reason why we learn Torah all night on Shavuos:

“The Gemorah in Psachim 68b tells us:  Rabbi Elazar says, “All admit that on atzeres – we require lachem – it should be for you as a holiday.  What is the reason?  Because it is the day that the Torah was given.”

The Meforshim explain that this Gemorah means we should be happier on this yom tov than on others.  Indeed, Rav Yechiel Yehoshuah Rabbinowitz, the Biala Rav, in his Seder HaYom writes this explicitly.  The yesod veshoresh haAvodah (Shaar HaTzon 10) develops this idea explaining that it is because we received this remarkable treasure of the Torah.

The Shla HaKadosh (Meseches Shvuos Ner Mitzvah 18) adds another level of insight.  He writes that it is the day we merited the “Crown of Torah.”  He cites the Gemorah in Psachim where Rav Yoseph states that were it not for this day, he would be just another “Joe” in the marketplace.

To understand this thought, the Rambam tells us (Hilchos Talmud Torah 3:13), “Even though it is a Mitzvah to learn Torah day and night, a person only learns the majority of his Torah at night.  Therefore, someone who wishes to merit the crown of Torah should be careful to study it each night not missing even one of them in sleeping, eating, drinking, conversation etc.  He should only engage in Talmud Torah and Divrei Chochma.  This is called the Rina of Torah.

The Av Beis Din of Ponovech explained (cited in Zichron Shmuel p. 574) that there are two aspects of studying Torah.  There is the aspect of studying it in fulfillment of the Mitzvah of Limud HaTorah.  There is also an aspect of learning it as “HaShira HaZos.”  In other words it is the song of the life of the person.  In it he delights and takes pleasure.  He does not delay in sticking to it on any account.  Any difficult situation he engages in it and he sleeps in the depth of its halacha.  Even when he is tired he studies it.

This is the fundamental idea of the Crown of Torah.

We can now better understand the Shla’s explanation of Shavuos.

The custom of Klal Yisroel learning all night is now also understood better.  It is not just to make up for the fact that we slept then.  No, the essence of the problem in that we slept was that we were not yet at the state where it was “the song of our life.”  We are thus correcting this flaw in who we were or are as a nation.

We should take greater pleasure and joy in this Yom Tov because it symbolizes the song of our lives.”

Rav Olshin studied in Yeshiva Torah V’Daas under Rav Eliyahu Moshe Shisgal zt”l (son-in-law of Rav Moshe Feinstei zt”l) and primarily in Lakewood under Rav Shneur Kotler zt”l.  He is, of course, one of the four Roshei Yeshiva of the Lakewood Yeshiva.

The Sefer was collated by Rav Olshin’s son, Rabbi Yisroel Shraga Olshin Shlita, a Rosh Chaburah in BMG.  Rabbi Moshe Gruen and a number of other Talmidei Chachomim spent much time and effort in editing the sefer.  Each volume has a general table of contents and a very extensive and detailed table of contents as well.  There is no index, however, which will hopefully be added in further editions.

The fifty-one shiurim in the first volume contain numerous Chiddushim and insights into various topics, beginning with Sfiras HaOmer, Shavuos itself, Birchas Hatorah and then Talmud Torah.

In his introduction, Rav Olshin explains the necessity of Bitachon, faith in Hashem, to acquiring Torah.  Indeed, in Ahavah Rabba we say the words on account of the faith of our forefathers – you taught them the laws of life.  Bitachon is a condition in Torah.  Indeed, the entire Sefiras haOmer is a preparation for the day of Matan Torah.  This explains why a shehecheyanu is not recited on the Mitzvah of Sefiras HaOmer – because it is preperatory in nature.

The sixty five Maamarim of this volume deal with Sfiras HaOmer, the Students of Rabbi Akiva, LaG BaOmer, preparing for Kabalas haTorah, Shavuos itself, Matan Torah and Talmud Torah.  Why do we mourn for the students of Rabbi Akiva to such an extent?  Rav Olshin answers that we are mourning the loss of the continuity of Torah – because the students who did not display the proper honor to each other were not worthy of carrying on that continuity.

These two volumes are filled with inspiration, insight, and chiddushim.

They are available for a very reasonable $25 at most fine Seforim stores.  It is the perfect gift for a learned baal habayis, a high school Morah, a seasoned Talmid Chochom, or a husband learning in Kollel.

The author of this review can be reached at [email protected]