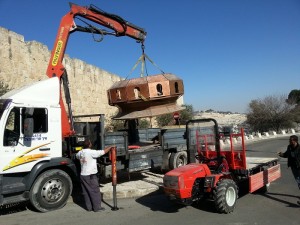 As the HaMikdash Institute prepares for a new exhibition, a large כיור נחושת was transported to the exhibit location, a delivery that required considerable care as those involved faced many logistical issues. The new kiyor is equipped with a system that eliminates fears of the Halachic inyan of ‘לינה בכלי שרת’.

According to Machon HaMikdash officials, the new kiyor is 2.5 meters high and its diameter is 2.8 meters, making a sizable heavy object, with officials pointing out it is kosher for use in the Third Beis HaMikdash and it can serve 12 kohanim simultaneously.