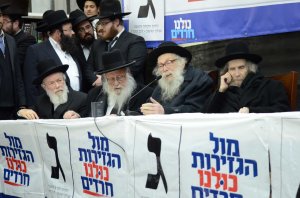 Shas and Yahadut Hatorah officials have already been in contact and have agreed to form a chareidi bloc following elections, the daily Yisrael Hayom reports. That means they will entering coalition negotiations as a unit and one will not enter without the other.

According to the latest Walla poll, the two parties will have a combined 16 seats, a significant number for one seeking to form a coalition. That same poll shows Likud/Beitenu receiving 34 seats, so the chareidi bloc can bring that number to 50 towards building a coalition with a simple majority in the 120-seat Knesset.