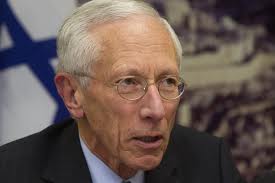 The Governor of the Bank of Israel Prof. Stanley Fischer on Tuesday, 18 Shevat 5773 informed Prime Minister Binyamin Netanyahu of his intention to step down on June 30, 2013, after more than eight years as in his post.

The governor noted that in addition to the goal of advancing the Israeli economy, one of his primary goals he had set himself was passing a new Bank of Israel law. That was done in May 2010. Since then, the Bank has operated successfully within the framework of the new law, especially through the work with the Monetary Committee and the Supervisory Council.

The Governor said that in the coming months he will continue to deal fully with all matters pertaining to the Bank.

Prof. Fischer added that he is extremely grateful for the opportunity he has been granted by the Government of Israel to fulfill the task of governor, especially during a challenging period that included the global economic crisis, a complex geo-political reality, and domestic social issues.

Fischer thanked the prime minister along with Finance Minister Dr. Yuval Steinitz, Knesset Finance Committee Chairman Moshe Gafne, the members of the Monetary Policy Committee, the Supervisory Council and the management and staff of the Bank of Israel for the privilege of working with them during his term as governor.

The governor will hold a press conference on Wednesday, 19 Shevat at 11:00 AM, at the Bank of Israel.

Prime Minister Netanyahu met with Fischer on Tuesday and thanked him for greatly contributing to the Israeli economy during his two terms in office over the past eight years.

“Professor Stanley Fischer played a major role in the economic growth of the State of Israel and in the achievements of the Israeli economy. His experience, his wisdom and his international connections opened a door to the economies of the world and assisted the Israeli economy in reaching many achievements, during a period of global economic crisis. I thank Stanley Fischer. I had the privilege of working with him both as Finance Minister, when he was appointed to the position and as prime minister over the past four years. I am certain that he will continue to contribute to the State of Israel,” Mr. Netanyahu said.